Cutlery means ‘that which cuts’, and can be anything from pocket knives, to scissors, ice skates and scythes. The first reference to cutlery made in Sheffield was in 1297, when the hearth tax records include Robertus le Coteler – Robert the Cutler. In 1340 King Edward III’s possessions in the Tower of London included a Sheffield knife, and Geoffrey Chaucer wrote ‘A Sheffeld thwitle [whittle] baar he in his hose’ about the Miller in The Reeves Tale. In the fourteenth and fifteenth centuries Sheffield and the surrounding area of Hallamshire were in competition with cutlery-making in Thaxted (Essex), Ashbourne (Derbyshire) and Woodstock (Oxfordshire). The largest manufacturing centre, however, was in London where trade was controlled by the Worshipful Company of Cutlers.

The Sixteenth and Seventeenth Centuries

In the mid-sixteenth century the Earls of Shrewsbury were the Lords of the Manor of Hallamshire, an area which covered the parishes of Sheffield, Ecclesfield, Handsworth, and Eckington and Norton in Derbyshire. The manorial court set up Cutlers’ Juries to control the cutlery and metalworking trades on their land, which included registering cutlers’ marks, controlling apprenticeships and working practices. The ordinances the manorial court drew up were later included in the rules of the Cutlers’ Company.

When Gilbert, Earl of Shrewsbury, died in 1616 the manor passed to non-resident lords who had little interest in maintaining the Cutlers’ Juries. In 1624 an Act of Incorporation was passed in Parliament, establishing the Company of Cutlers in Hallamshire. They had control over apprenticeships, admitting freemen, registering cutlers’ marks and regulating the quality of cutlery produced. These powers were reduced in 1814, and the Cutlers’ Company was only allowed to register cutlers’ marks after this date.

In Sheffield, before 1650 steel had to be imported from Sweden. It was only after this that the secret to making blister steel was discovered. Iron was heated with charcoal in a cementation furnace for about a week, which allowed the metal to carbonize. Once it was taken out it was forge-welded into bars of shear steel; the heating and hammering helping to diffuse the carbon in the steel evenly.

Metalworking had always been a key industry in Sheffield due to the availability of nearby raw materials such as iron ore, coal, charcoal and stone for grinding wheels. Sheffield had another advantage; several fast flowing rivers to help power machinery. Improvements in waterwheel technology meant that waterpower was used to help stamp out metal objects, and power heavy drop hammers and grinding wheels. In 1700 there were 36 water powered wheels in the valleys surrounding Sheffield, but by 1800 this had increased to 97.

While silver and Britannia metal items were popular, the discovery of Old Sheffield Plate by Thomas Boulsover in 1743 was a great commercial success. By fusing silver to sheets of copper, silver items were made more affordable. The production of silver and plated items increased so much that in 1773 the Sheffield Assay Office was founded. This meant that valuable items did not have to be taken to London to be hallmarked, a journey which often ended in robbery by a highway man.

Experiments by Benjamin Huntsman in the 1740s resulted in the crucible steel process. Blister steel was melted in a crucible with a purifying agent, which allowed the slag and impurities to be skimmed off and the carbon to be evenly distributed in the molten metal. The finished product could also be poured into moulds, to make any shape. This allowed for the large scale production of steel and resulted in a stronger and harder final product. This allowed Sheffield to push ahead of other competitors, supplying the growing world-wide demand for cutlery.

The introduction of steam powered machinery in the 1780s did not alter the traditional manufacturing structures much in Sheffield. While some manufacturers, called factors, tried to bring as much of the cutlery making process under one roof as possible, creating the first factories, the majority of work was still carried out by ‘Little Mesters’. The Little Mester was a highly-skilled craftsman who worked with a few employees and apprentices in a small workshop, which was often in their own home. Each mester would specialise in one process, such as forging, grinding or hafting, and they later specialised further by making specific types of cutlery or working in a single material. This meant that one item of cutlery would pass through many pairs of hands before it was finally finished. The system finally went into decline from the 1950s, but there are still a handful of Little Mesters working to this day within Sheffield.

Despite the growth of both Sheffield and the cutlery industry, most manufacturing was concentrated within a square mile of the city centre. This was due to the specialisation of processes within cutlery manufacture, which relied on having other cutlery producers nearby to work with and for.

The largest market for Sheffield cutlers in the early nineteenth century was America. In 1812 6000 people out of the working population of 18,000 were making for the American market, and it was reported a third of all manufactured goods were for export to America. One knife, however, became iconic in early nineteenth century America; the Bowie knife. After 1840 demand increased and Sheffield dominated the market, specialising in Bowies with patriotic decorations on the blade and handle. It was not until the start of the American Civil War in 1861 and the raising of American trade tariffs that Sheffield’s export trade began to contract. American cutlers fully embraced mechanisation and mass production, which allowed them to produce cheaper goods. Competition from European cutlery centres, such as Solingen in Germany, also damaged Sheffield’s trade.

After the 1840's electroplating became a more common method of silver plating metal items. This process was developed by Elkington's of Birmingham, and it soon replaced Old Sheffield Plate as a manufacturing method in Sheffield.

The Twentieth Century to Today

The history of twentieth century cutlery making was dominated by a single development; Stainless steel. In 1913 Harry Brearley, head of Firth-Brown Research Laboratories, discovered that a low-carbon steel with 12% chromium would resist rust. The First World War halted production, however, once this ban was lifted it took a while for Sheffield cutlers to accept the new metal. It could not be forged or ground in the traditional manner, so new machines were introduced to punch out blanks from cold-rolled stainless steel, and heat treat, grind and polish the blades. The increase in mechanised production to meet the demand for stainless steel products meant that many skilled jobs were lost in the interwar period.

After the Second World War and post-war austerity Sheffield trade began to revive. By 1950 around 15,000 people were employed in the cutlery industry, most working in small companies which had fewer than a dozen employees. This post-war boom did not last. The contraction of foreign markets and the increase in cheaper overseas competition, particularly from the Far East, meant that from the 1960's onwards the cutlery industry in Sheffield shrank sharply. The economic difficulties of the 1970's and ‘80's also forced many of the remaining firms out of business. By the 1990's there were only around 1000 people employed by a dozen or so in cutlery manufacturers left in Sheffield. Many of these family run firms are still operating today, producing cutlery made in Sheffield. Look at our cutlery map to discover which companies are still active. 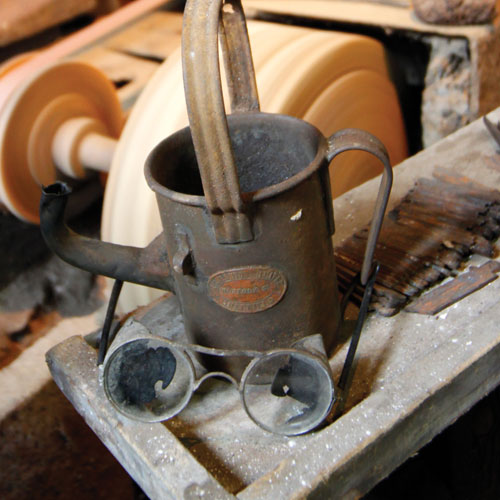