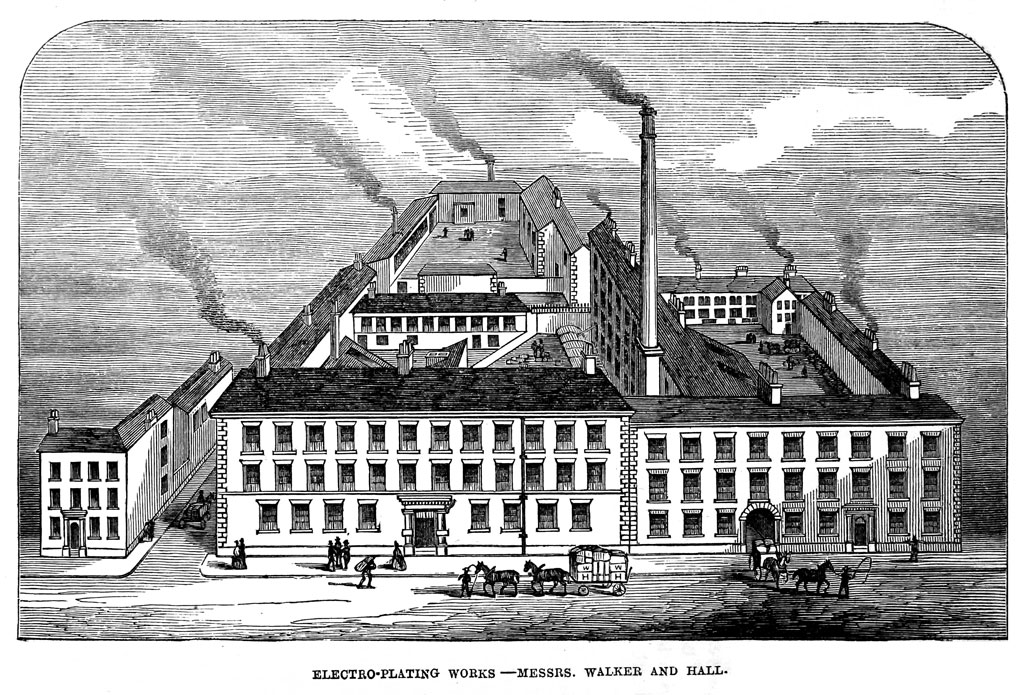 Walker & Hall's Electro Works from 1862. The company made its fortune from electroplated items, hence the name. ©Picture Sheffield.

The origins of the company Walker & Hall began with John Harrison, a Britannia-metal worker who took out the first licence in Sheffield from Elkington on 13 June 1843, to make electroplated items. He hired George Walker to go to Birmingham and learn the electroplating process. Walker did this, but two years later he decided to leave John Harrison’s employment and set up on his own, taking out a licence for him and his business partner, Samuel Coulson. They did not start manufacturing straight away, but soon after he did he was joined by another partner Henry Hall; the company of Walker & Hall was born.

Two of Henry Hall’s nephews joined the business in the 1850’s, when Sir John Bingham joined in 1852 they had fewer than 20 workers. Charles Henry Bingham joined later and helped grow the manufacturing side of the business. By 1894 the company reported 1500 employees in total. The company under Sir John Bingham was adept at publicity; they appear to be the originators of the story that George Walker was a co-inventor of the electroplating process with Dr John Wright, and that Wright took him to Birmingham because ‘the youthful prodigy was so necessary’. This is sadly untrue, but the story has made it into many texts as fact.

The massive central block of the Electro Works of Walker & Hall dominated the central Sheffield skyline from the later 19th century up until the Sheffield Blitz of 1940 when some of the building was destroyed by the German Luftwaffe. The company liked to boast that the flags on each corner of the building always flew; this is because they were made of metal and were rigid! The company rebuilt and continued production until 1963 and the building was demolished in 1965

Walker & Hall specialised in electro plate, cutlery and silver. In a bid to modernise an increasingly old fashioned post-war range of goods, the company director hired the young designer David Mellor in 1954 soon after his graduation from the Royal College of Art. Mellor produced his stripped down modern cutlery designs first in silver plate, then in stainless steel. The ‘Pride’ range featured here won one of the first Design Centre awards in 1957. Walker & Hall were subsumed into the Clore Group and ultimately into British Silverware Ltd in 1963, and finally shut down as a manufacturer in 1971.The name was later revived as a retail firm.