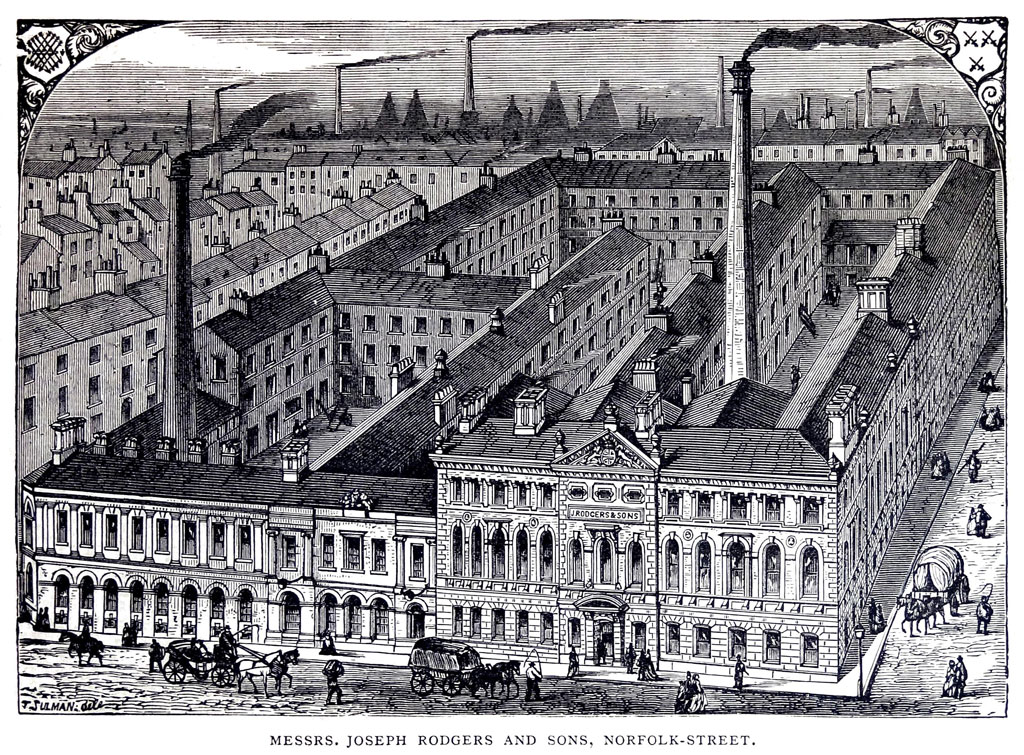 No. 6 Norfolk Street, Joseph Rodgers' main showrooms and one of his works. ©Picture Sheffield

The company was founded in 1724 when John Rodgers first rented the star and Maltese cross mark from the Cutlers’ Company. He was renting a house workshop in Holy (Hawley) Croft, which used to be off Campo Lane. John’s three sons John, Joseph and Maurice joined the family business, which began to expand rapidly. In the 1780s the family moved into a block of workshops which would become their most famous address, No. 6 Norfolk Street. In 1800 Joseph and Maurice formally dissolved their partnership and the firm was renamed Joseph Rodgers & Sons. As well as producing an unrivaled range of pen and pocket knives, the company became famous for their exhibition cutlery, which showed off the skill of the cutlers working for them. These wonders could be seen in the company showrooms on Norfolk Street, which when opened in 1825 caused a sensation. There were very few showrooms within Sheffield, where visitors could come to look at and buy goods in plush surroundings. The first visitors did not even realise that the goods in the cabinets were for sale, the idea was so strange.

Joseph Rodgers had a reputation for producing the best quality items in Sheffield. In the company history Under Five Sovereigns (1911), it was said that in ‘Persia, India and Ceylon, the name…has entered into the language as an adjective expressing superlative quality.’ A café in Bombay [Mumbai] said that their food and drink was ‘all Rojers’ best things.’ Another story was of a British officer travelling in ‘Russian Turkistan’ who lost his Rodgers knife. A village headman commiserated with him because there were no more Rodgers knives made. When the officer objected the headman told him that a British traveller had given him a Rodgers knife and told him they could cut through iron, something a prisoner in chains had done. The King of England was very angry at losing his prisoner and cut off both of Rodgers’ arms at the elbow in punishment, to stop him making such good knives.

While continuing to make high quality products, the late Victorian period onwards were difficult for the company. By 1929 they had sold No. 6 Norfolk Street, and had been recording losses during the Great Depression. From a workforce of 1500 in 1914, the company had reduced to 325 employees in 1961. The company bought George Wostenholm & Son Ltd in 1971, however, it stopped trading by 1983. The name is now owned by Egginton Brothers and is still being stamped on Sheffield made cutlery today.

Joseph Rodgers & Sons is now owned by the Egginton Group. A brief history can be found on the company website.