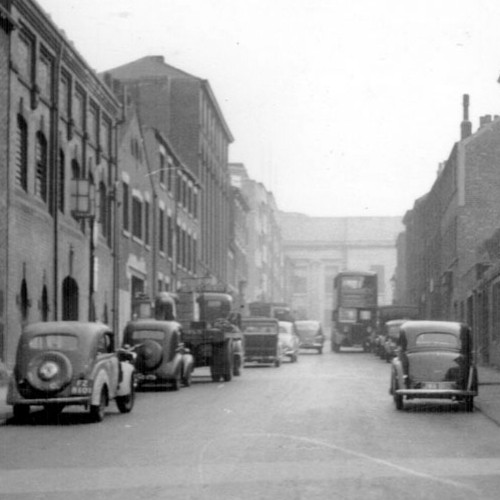 Eyre Street in the 1950s. This is where Edwin Hunter had a workshop in the mid-nineteenth century. The large building on the left is the Marples Brewery. ©Picture Sheffield.

Edwin Hunter was a 19th century Sheffield scissor maker. Along with several other Sheffield cutlery manufacturers he exhibited his skills at the London Great Exhibition of 1851, showcasing 220 pairs of extraordinary scissors, ranging from 22 inches long to one inch long. The scissors featured here depict the Duke of Wellington, a great celebrity of the times, in detail from his horse to his legendary large nose. When Edwin Hunter died in 1873 no-one took over his company or bought the name, so his family donated over 170 pairs of scissors to the Sheffield City Museum when it opened in 1875. They provide an excellent record of the output of one firm during the nineteenth century, showing the range of products and decoration that could be produced by hand.